The mortal remains of Queen Edith were reburied in Magdeburg Cathedral on 22nd October 2010 during an ecumenical ceremonial act that began at 1pm. 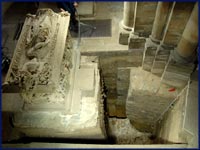 The congregation was welcomed to the event by the then Minister of Education and Cultural Affairs of the German Land of Saxony-Anhalt, Prof. Dr Birgitta Wolff, the Mayor of Magdeburg, Dr Lutz Trümper, and Andrew James Noble, an envoy representing the United Kingdom of Great Britain and Northern Ireland. A speech was also given by Dr Bettina Büttner, the Chairwoman of the Parish Council, on behalf of the Cathedral Community and was followed by a devotional and prayers by the Bishop of the German Land of Saxony-Anhalt, Ilse Junkermann, and the Bishop Dr Gerhard Feige.

The musical accompaniment to the service was provided by the Magdeburg chamber choir “Labia vocalia” and the choir from the British Embassy in Berlin.

The service also featured a presentation by Prof. Dr Harald Meller, the Head of the Saxony-Anhalt State Office for Heritage Management and Archaeology. Archaeological research excavations have been taking place in Magdeburg Cathedral on behalf of the German Land of Saxony-Anhalt since 2006. In autumn 2008, the archaeologists came across an unexpected find in the sandstone sarcophagus of Queen Edith of England in the form of a lead coffin with an inscription stating that it contained the remains of Queen Edith herself.
Scientific examinations of the content of the coffin have now confirmed that the remains are "highly probably and almost certainly” the mortal remains of Queen Edith. At the age of 19, the English princess Edith came to Magdeburg from the English county of Wessex in order to marry Emperor Otto the Great, who presented the city of Magdeburg to her as a morning gift at their wedding. She died in the year 946 at the young age of just 36.

Queen Edith’s medieval lead coffin was one of the star exhibits at last year’s “The Gothic Awakening” exhibition, which was held in Magdeburg Cultural History Museum on the occasion of the 800th anniversary of Magdeburg cathedral.
The ‘modern’ coffin in which Queen Edith was re-interred on 22nd October, on the other hand, is a true testimony of our time. The work of art, which was created by the sculptor Kornelia Thümmel from the German city of Dresden, was the winner of a competition organised by the Saxony-Anhalt Arts Foundation. The sophisticated polygonal container, which is made of titanium on the inside and fine silver on the outside, looks like a crystal. One side of the coffin contains a simple cross and the other bears an inscription reading: “This sarcophagus contains the mortal remains of Queen Edith, the wife of Emperor Otto the Great, who was reburied in the year Anno Domini 1510, rediscovered during archaeological excavations in the year 2008 and once again re-interred in the year 2010”.

Between 3pm and 5pm on the day of the reburial, the residents of the city were given the opportunity to come and view the new titanium coffin in the open sandstone sarcophagus, which was then closed and sealed with the extremely heavy lid.