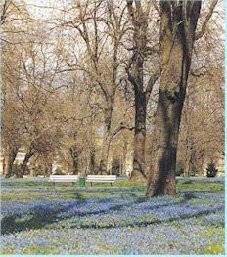 This park can be found in the Alte Neustadt district north of the city centre and near the Otto von Guericke University. In the beginning it was meant to be a municipal cemetery. As there was not enough place within the city walls to bury the dead, plans were made for the a cemetery in front of the walls of the old city centre in 1824. The plans were again carried out by the famous garden architect Peter Joseph Lenné and in 1827 the new north cemetery was inaugurated. However, in 1898 it was closed after two more cemeteries were created in the south and west of the city. In the following years, the former north cemetery was transformed into a public garden.

After the Second World War, the north-eastern part was used to bury the fallen Soviet soldiers. Some of the original old stones can still be found which mark the last home of historical figures from Magdeburg's past. The monument dedicated to Magdeburg's Lord Mayor August Wilhelm Francke deserves a special mention. He was responsible for the construction of the northern cemetery. Another monument commemorates Lazare Carnot, one of the main characters of the French Revolution, who was forced to leave France and spend his last years in exile in Magdeburg. In spring, the Nordpark always enchants its visitors with innumerable scilla flowers which transform the lawns into a wide blue sea of flowers.