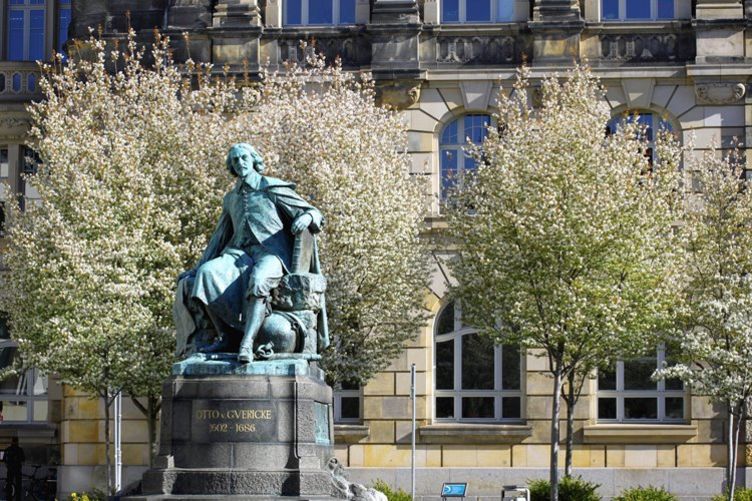 Otto Guericke was born on November 20, 1602 in Magdeburg (according to the Old Calendar). He descended from a wealthy patrician family long established in the city. In 1666, he was ennobled by the Holy Roman Emperor Leopold I and the title "von Guericke" was bestowed upon him.

Guericke was educated at the Universities of Leipzig, Jena and Helmstedt and studied law and fortification at the University of Leyden (Netherlands), which was one of the most progressive centres of education at that time. As a member of the Magdeburg city council (since 1626), he witnessed the nearly complete destruction brought upon his home town in 1631 by imperial troops under the command of Tilly and Pappenheim. The news about the fall of Magdeburg spread like a wildfire because the city was long considered to have assumed an important role as a protestant stronghold. At that terrible time, the Guericke family suffered a tremendous loss: Otto von Guericke lost his youngest son and barely managed to save himself.

However, he made a name for himself as engineer under Swedish and Saxon patronage. Von Guericke played a large role in the reconstruction of Magdeburg and put much effort in negotiations with the occupation forces in order to ensure adequate supply for the population. He soon became Lord Mayor (1646), and he also became an important political representative of Magdeburg during the piece negotiations held in Münster and Osnabrück, from where he returned with good results.

In addition to his political activities, von Guericke dedicated much of his time to studies and experiments which earned him world-wide reputation. Von Guericke was much concerned with the nature of space and the possibility of empty space: "Is there only empty space between the celestial bodies or is the cosmos filled with swirling ether?", he kept on asking himself. He began with experimental investigations and came up with a real surprise: He designed the first air pump with which he actually succeeded in creating a vacuum for further experiments. In a famous series of so-called "Magdeburger Experiments" that were performed before friends and guests in Magdeburg, von Guericke demonstrated the tremendous force that air pressure exerts. Teams of four, eight and even sixteen horses could not pull apart the two joined hemispheres when the air within had been evacuated. Von Guericke described his most important experiments and their results in his famous book „Experimenta nova [ut vocantur], Magdeburgica de vacuo spatio“ (New [so-called] Magdeburg experiments with empty space, 1672).

More experiments lead to greater knowledge: Von Guericke designed, for example, a barometer with a lengths of eleven meters, filled it with water and propped it up against the wall of his house. He was able to observe the changes of atmospheric pressure and its influence on the weather with the barometer and to measure the air temperature with a thermometer. In fact, Otto von Guericke paved the way to weather forecasts. His pioneering work on the nature of air pressure (lifting experiment) contributed to the later development of steam and combustion engines.

Moreover, he was the first scientist to carry out experiments with a sulphur globe in 1660 and has been considered the father of static electricity ever since. Later on, he used his findings to develop an electrostatic machine. On 11 May 1686 (according to the Old Calender), Otto von Guericke died in Hamburg, while he was estaying with his son. Von Guericke's body was returned to Magdeburg and buried in the family crypt which is in the basement of St. John's Church.

Back (Emperor Otto the Great)