Duke of Saxony, King of East Franconian Empire, Emperor of the Holy Roman Empire
* November 23rd 912 in Memleben
† May 7th 973 in Memleben 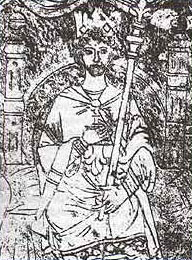 Otto I was the most influential character of Central Europe during the whole of the 10th century. As the Duke of Saxony, he reinforced the Ottonic-Salian empire church system, with the high clergy supporting his power. Magdeburg played its part when Otto I married the English princess Editha († 946) in 929 where she was given the city as a wedding gift.

When in 936 in Aachen he was installed as the East Franconian King, he extended – in connection with securing the Eastern borders of the empire and founding new dioceses in order to mission the Slavs – the Magdeburg Palatine to the centre of power. Through his politics the city became one of the leading centres of government in the 10th century.

After Edith died, and after his first campaign to Italy (951-952), he married Adelheid of Burgundy. He received the epithet “The Great” in 955 when he won a victory over the Hungarian cavalry in the battle of Lechfeld, thereby ending more than fifty years of Hungarian invasions. In grateful recognition he ordered in the same year the Magdeburg Cathedral to be built, which is the predecessor of the building still standing today. The second campaign to Italy (961-965), answering a call for help from the Pope, resulted in the Emperor’s crown for him and his second wife Adelheid. Since then, Otto the Great is said to be one of the founders of the Holy Roman Empire.

Magdeburg was for Otto I just as significant as Aachen for Charles the Great; he was buried (he died May 7th 973) in his favourite Palatine next to his first wife in the cathedral. The Emperor’s heart was, according to the old custom, buried in the place where he died, in Memleben.