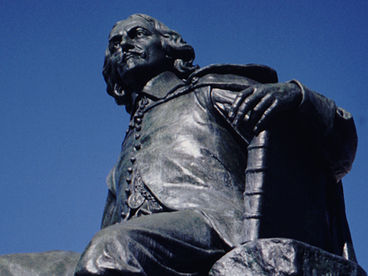 The great son of the city is remembered as a diplomat and scientist, a universal genius. Otto von Guericke put his life in the service of his hometown and of natural science. He appeared politically gifted, but at the same time was, body and soul, an engineer and physicist. He descended from an old established and wealthy Magdeburg patrician’s family, and was knighted in 1666.

Otto von Guericke studied law at different universities; from 1623 onwards he completed his education in Leiden in the field of natural science.
In 1630, he became a construction engineer in his hometown where he experienced the fall of Magdeburg in the Thirty Years’ War. Following the invasion by the Emperor’s troops led by Tilly, the proud mediaeval town was completely destroyed. This tragedy also had consequences for his family. Otto von Guericke was able to save himself; his son however died in the confusion of war.

As an engineer ranking as an officer, he served first for Sweden, then, from 1636 onwards, for Saxony. After the Prince Ludwig of Anhalt had been made governor of Magdeburg by the Swedish king, he put Otto von Guericke in charge of reorganising and rebuilding the ravaged city. As the mayor, he played a significant role in the decisions concerning Magdeburg from 1646 onwards. His participation as a Foreign Affairs Representative at peace negotiations in Osnabrueck, Nuremberg, Vienna, Prague and at the Regensburg Parliament is certain. His struggle for Magdeburg to keep its privileges as a free imperial city was in vain. Otto von Guericke slowly retired from politics. From his own experiences, he wrote a history of the siege and destruction of Magdeburg.

He became world famous through his scientific experiments. He was one of the pioneers of exploring air pressure. He succeeded in proving in his experiments that a vacuum can be created artificially. He invented the vacuum air pump and the barometer. In the experiment with the Magdeburg hemispheres, he impressively proved the effects of air pressure in 1654, and again in 1663 at the Berlin court. He summarised his insights in 1672 in his work “Experimenta nova, ut vocantur, magdeburgica de vacuo spatio“.
Otto von Guericke was also a pioneer of meteorology. He succeeded in 1660, through systematic observation of changes in air pressure, to forecast bad weather. Another field of work was friction electricity; he developed the first electrifying machine. He is believed to be the father of electrostatics.
In 1907, a statue by Carl Echtermeier was erected next to the city hall which reminds us of the famous mayor and natural scientist. Magdeburg’s university is named after him and, to his honour, his bust has been placed in the Walhalla temple near Regensburg. Many aspects of public life are closely associated with Otto von Guericke. For example, the Otto von Guericke Society cultivates his legacy, and his experiments can be followed true to the originals in the Otto von Guericke Museum in the Lukasklause.