Former detention facility of the Ministry for State Security 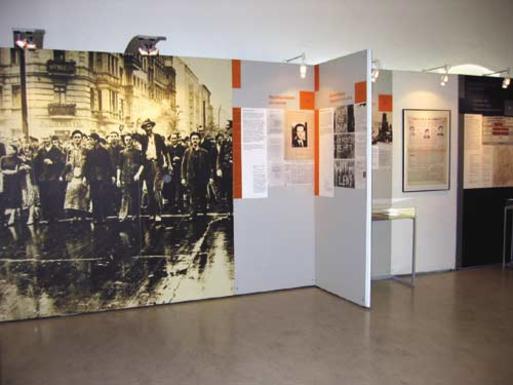 From 1873 to 1876, the red brick building in the north of Magdeburg was erected as a royal-Prussian district court and city prison. After the end of the Second World War, the “Prison Magdeburg-Neustadt” fell for awhile into the hands of the Soviet military administration, but again in September 1945 it belonged to the German administration. During the national uprising on 17th June 1953, the prison was taken by storm and 221 inmates could be freed. Shortly after the declaration of the German Democratic Republic (GDR) in October 1949, the Ministry for State Security (MfS) was founded as an intelligence agency and secret police. According to the directive 1/58, the MfS should preventatively nip all attempts to stop or to anticipate the victory of socialism in the bud - regardless of the necessary means and methods. In 1957, the MfS took over the building as a detention facility of the district administration of Magdeburg for political prisoners. In the 1950s and 60s, many GDR citizens were arrested for political reasons, such as alleged espionage or subversive actions. Later on, even people who wanted to or did assert their freedom of opinion and those who tried to leave the country by taking flight or filing a departure application form could be arrested. They were imprisoned by the State Security and forced - under the violation of human rights - to make a full confession to a political crime. This was the basis for the sentence of imprisonment for years in penal institutions.

In autumn 1989, persevering protesters enforced the breakdown of the GDR’s political system. On 6th December 1989, the foundation of a civic committee for the control and termination of the Stasi’s activities (Stasi stands for main security and intelligence organisation of the former GDR) was determined under pressure by new political groups and the churches in order to stop members of the State Security from destroying incriminating files and evidence. In February 1990, the former MfS facility was vacated. Only a few months later, in autumn 1990, the prison cells of this building hosted a six-week exhibition entitled “Stasi in Magdeburg“, which was organised by the civic committee Magdeburg and the registered association “Memorial Magdeburg”. 23,000 visitors have experienced the first findings concerning the MfS and the treatment of political prisoners. Therefore, it was the exhibition’s initiators and the visitors who demanded that: “This site become a memorial.“

In December 1990, the city council decided upon the foundation of the memorial in one part of the building (former prison cell wing). Since 1994, it has been a federal memorial site which is promoted by the Land and the City of Magdeburg. In 1992, the “Bürgerkomitee Sachsen-Anhalt e.V.“ (civic committee) opened a documentation centre on the premises of the front building (former interrogation building). The memorial fulfils various functions: advice from former political prisoners and the recording of their experiences as well as guided tours, exhibitions and publications in the context of political education. People have to bear the victims of this cruel dictatorship in remembrance instead of burying them in oblivion. The memorial’s staff aim to make a warning statement for the protection of human rights and to increase the awareness of people’s responsibility for democracy.

On 21st June 2004, the Federal Ministry of Justice handed over the exhibition “Im Namen des Volkes? Über die Justiz im Staat der SED“ (On behalf of the people? Justice in a state dominated by the SED - Socialist Unity Party of Germany) as a gift to the Land Saxony-Anhalt in order for the exhibits to be presented on a permanent basis at the Magdeburg Moritzplatz Memorial. From 1992 to 1993, this exhibition had been planned carefully by an advisory council - a group of scientists and exhibition experts - on behalf of the Federal Ministry of Justice. During the planning, experiences from an exhibition on the justice in Nazism, which was opened by the Federal Ministry of Justice in 1989, had been a helpful source. The exposition was planned as a touring exhibition, and in 1994, it was presented for the first time on the premises of the District Court Berlin in the Littenstrasse. Since then and for the next ten years, numerous visitors have had the chance to view these impressive exhibits in 33 cities all over Germany until the exposition found its final home in Magdeburg. The exposition presents a selection of important events and structure and reveals how the SED misused the judicial system in order to achieve its objectives. The GDR’s jurisdiction was an element of a centralistic state and social order, in which the rule of the working class under the leadership of their Marxist-Leninist party had existed right from the start and which was fixed in the Constitution in 1968. The separation of legislation, administration and jurisdiction was considered to be a “relict of civil thinking” and thus had to be abolished. Justice became a part of the uniform authority and therefore lost its autonomy. The exhibition consists of three parts. The first part displays the events from 1945 to 1971, the era of the German communist politician Walter Ulbricht. The second part informs about judicial structures, the governance of justice by the state and the party, its everyday functions as well as the importance of further institutions of socialistic jurisdiction (penal system and State Security). The final part (1971 - 1989) reports on events during the era of the German communist politician Erich Honecker and the time until the end of the GDR. In addition to the exhibition boards, further elements illustrate the historical facts. A multimedia terminal allows for the play-back of historical films and news programmes and there is also an exhibition catalogue available.

Since 14th November 2005, the special exhibition entitled “Der 17. Juni 1953 in Magdeburg“ (17th June 1953 in Magdeburg) has been open to the public. This exhibition originated in 2003 on the occasion of the 50th anniversary of the national uprising in the GDR and could already be visited in the Magdeburg Cultural History Museum.